Photographer Silliness – Who the Hell Cares What Kind of Camera, Lens, Tripod You Used? 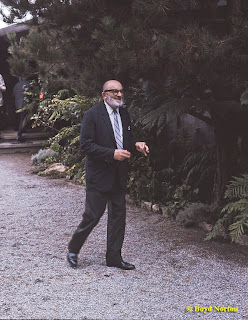 Someone once asked Ansel Adams what equipment he used to make his marvelous photographs and he replied, “A camera was faithfully used.” (photo at left, Ansel greeting us at his home in Carmel in May, 1968)

I’ve been guilty in the past of techno garbage data accompanying photos in some of my books because my publishers insisted that people wanted to know what camera, lens, f-stop, etc. was used. I relented and included the data in some of my early books, but it was mostly made up! In the early days before digital, who the hell remembered what lens or f-stop or even camera (I had several) was used? And who cared?

Today, however, it has gone to extremes. Not only is the camera and lens and f-stop given, but also the tripod and tripod head. Good Grief! What silliness! When it comes to judging photographs, it’s the content, stupid!

Now, if you don’t match everything here exactly, you ain’t gonna make it as a photographer!